Even the most talented representatives of our pseudo-European progress had long ago become convinced that it was perfectly criminal for us, Russians, to dream of our distinctiveness. The most terrible thing about it is this, that they are quite right; for, once having proudly called ourselves Europeans, we have thereby denied our being Russians.

A few days before the New Year me and my friends were heading to the private exhibition/party. Suddenly, we saw a ‘son’ and his ‘mother’ (at least, we perceived them as such). The Son was playing a sad melody on his violin and the Mother was singing. I understood that this scene is like a perfect random scene from an American film ‘about Russia’ or a moment from an American film when ‘Russia is shown’. Probably, the violin in this film would be replaced with balalaika or garmoshka and several vodka bottles in the background would also make the cut.

So I said this (in Russian) from the standpoint of a fictional  Narrator in such a film:

“Sergey with his friends were walking in the cold windy streets of winter Moscow, covered with frozen mud, ice and snow. Suddenly they heard the sounds of garmoshka playing and saw a mother and a son singing an old Russian folk song…”

Don’t take this ‘Narrator’ concept too literally. It’s just a metaphor (it’s not a ‘voice in the head’ thing) but still it’s a real – yet, imaginary – Voice of the Other which plays a certain role in Russian mass (sub)consciousness. In other words, the Narrator is a personification of Russian double consciousness [see below].

Russians are Europeans, both culturally & genetically, but through the history they were viewed in the West as not-so-European and even non-European in the extreme. This resulted in what I call Russian double consciousness (to coin a term by W.E.B. DuBois and paraphrase his definition):

Russian double consciousness is a sense of always looking at one’s self through the eyes of Westerners.

It should be noted that using the terms ‘Western’/’Westernized’ or ‘European’ in relation to Russians is slightly tautologic because Russians as a whole are as Western as it can get. Russian ‘peculiarities’ doesn’t make Russia non-Western – they rather constitute Russia’s uniqueness as a Western(ized) nation. In a process of identity building one’s actions of creating, maintaining and developing a certain identity are just as important as acceptance of this identity by the Other. The ambiguity of Russia’s Westerness is due to non-acceptance and non-acknowledgement of it by the old, core Europe or – in the best case scenario – the level of acceptance doesn’t satisfy Russians. The explanation behind this non-acceptance/non-acknowledgement can be found in the long history of Russia-West relations, in the European and/or American (geo)politics and the role which Russia played in the world in ‘Western’ eyes. This role is essentially the arithmetic mean between a scarecrow, a strawman and a scapegoat and it has little to nothing to do with Russia’s real politics (from the Russian perspective).

The longing for European/American acceptance and acknowledgement was the basis of Western soft power in Russia. It was one of the main reasons of West’s victory in the Cold War. Post-Soviet Russia’s late crude, uncritical Eurocentrism/Western-centrism was an addiction which had a bad influence on Russians on a psychological level. Idealization of the West by Russian elites and masses not only severely undermined country’s sovereignty but led to self-hate and identity crisis. The adoption of simplified Western view of Russia and positioning it as an axiom in Russian media strengthened the sense of shame, disgrace and hopelessness common among Russians in ‘likhiye devyanostye‘ – the Daring Nineties – and resulted in Russians’ alienation to their native country.

This simplistic Western approach to Russia can be characterized as ‘Otherization through Orientalization‘ when Russian social, cultural, etc., phenomena are used out of context, hyperbolized, Orientalized and presented as an all-Russian characteristic [see: klyukvification]. Russian radical Western-centrism resembles a cargo cult when Western products and concepts are seen as something ‘inherently good’ because of their undisputed ‘authentic Westerness’.

Generalized  view of Russiain the mainstream Western media is a (quasi-)colonial one.

Just made a coub Dancing Gopnik (The Renegade Of Funk)) http://t.co/Q35FO6MFNb

Here’s the mechanics behind the (quasi-)colonial mentality:

It’s no surprise that Western klyukvification particularly in its vilifying Russophobic version affected Russian collective self-image. In social psychology there’s a concept of looking glass self, i.e. the self-image a person constructs based on how other people view him/her. From this perspective Russian double consciousness can be treated as collective looking glass self dependent on the Western view of Russia. Of course, Russian identity cannot be limited only to Russian perception of the Western perception of Russia. I just wanted to underline a certain trend.

Thus, self-image of a Russian person is shaped to some degree by the Russian perception of Western generalized image of Russia. The West is Russia’s ideal Other (and vice versa) which reveals itself through Narrator’s Voice. The ‘what-they-think-about-us’ curiosity here represents not only interest in Other’s point of view but is often taken as a fact:

“The Narrator can’t be wrong!”

Among the consequences of Russian double consciousness and the adoption of Western quasi-colonial view of Russia were that some Russians try to play the role of ‘good Russians‘ for foreigners. [I’m not talking about the TV screen Russians which were chosen to portray the ‘good Russians’ by the mainstream Western media and were endorsed as ‘Russian truthsayers’.] In this distorted hyper-Eurocentric view Westerners are viewed as the ‘first-class people’, ‘ubermenschen’, and the Western master discourse of Russia is treated as fact. In order to gain subjectness and independence from the Narrator, those who practice playing the role of ‘good Russians’ (in this context) should stop trying it to be perceived as ‘necessarily good’ by foreigners. Obviously, one shouldn’t portray the negative stereotypes instead: the roles of ‘bad’, ‘crazy’, ‘scary’, ‘nutty’ Russians, etc. [see: Pussy Riot effect].

What’s currently happening in the sense of cultural (worldview) optics is that Russians are starting to look at Russia through Russian eyes without loosing the ability to view it through Western (American and European) eyes. 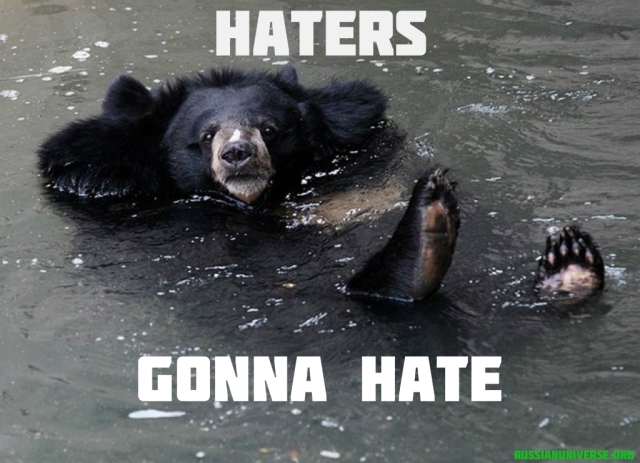 To have a Russocentric optics Russians should ‘fire the Narrator‘ or at least ‘turn the volume down’ when it’s needed. Russia’s quasi-colonial Western-centrism is now being replaced with Russocentrism. In the Western mainstream media it is referred to as ‘Russian Neo-Imperialism’, ‘Russian fascism’, ‘Orthodox fundametalsim’, ‘Soviet restoration’, etc. If one wants to look past these poshly propaganda concepts, Russocentric view means looking at Russia and the world through Russian eyes, i.e. keeping in mind Russian national interests in the first place.

I created the Coub below from an already klyukvified and funny video by adding a melody played by Alexey Arkhipovsky, Russian balalaika virtuoso. The pseudo-Russian dance of the actor portraying Vladimir Putin and the stylized Eastern melody (the track is called ‘Vostochnaya’ which means ‘Eastern’ in Russian) give an Orientalized flavour to this klyukva. [The topic of the images of Russian leaders in the West is too huge for this post.] In the ‘Balalaikization’ Coub above I also used a balalaika improvisation by Arkhipovsky.

By the way, in an interview Arkhipovsky spoke of a Russian sense of ‘balalaika inferiority complex’ to other instruments (e.g. guitar) which he neglects. For Russian general public (often) ‘balalaika’ automatically means ‘klyukva’, even in a neutral context. This is for the most part due to Western klyukvified/Orientalized narratives involving balalaika. So I think that a tiny bit of therapeutical (positive) Orientalization is psychologically good for Russians.

If the biggest Western quasi-colonial wet dream is Russia The Orientalized [see: Pt. 2], then the biggest nightmare is Westernized and Russocentric Russia with strong pro-Russian elites (i.e. not quasi-colonial ones) supported by millions of Russians.

“The fullest breakthrough in Russia’s political life shall occur when Europe realizes that Russia does not really want to conquer anything. Then a new era will come, both for us and for all of Europe. A realization of Russia’s selflessness, if it ever happens, shall immediately renew and change the whole face of Europe. This realization shall no doubt ultimately reign, but not due to our assurances: Europe shan’t trust any of our assurances until the end and shall view us adversely still. It is hard to imagine the degree to which [Europe] is afraid of us. And if it is afraid then it must hate us. Strikingly, Europe does not like us and it has never liked us: it has viewed us not as its own, as Europeans, but always as nettlesome outlanders. That is why Europe likes to console itself occasionally with the thought that Russia is somehow “yet powerless”. 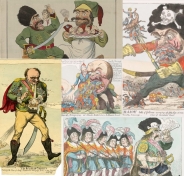 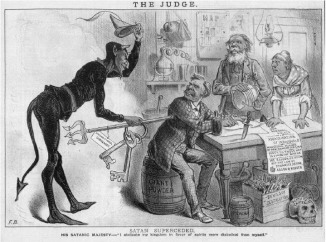 Klyukvification caricature Russian bear in ushanka with balalaika and muzhik

How people view me after I say I’m Russian 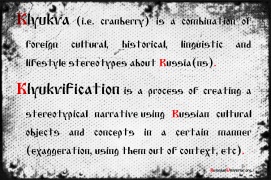 Russian bear stands in opposition to the other foreign powers 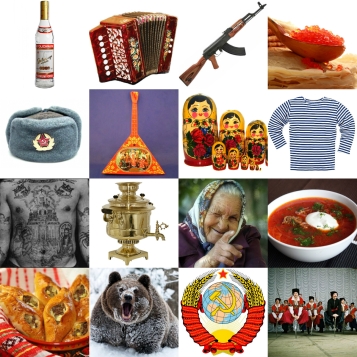 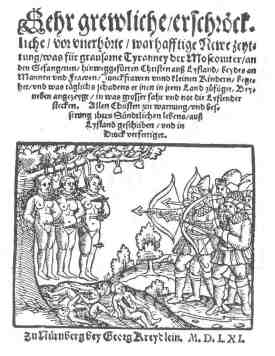 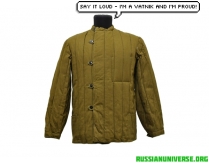 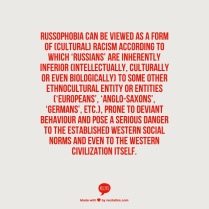 Russophobia can be viewed as a form of (cultural) racism according to which ‘Russians’ are inherently inferior (intellectually, culturally or even biologically) to some other ethnocultural entity or entities (‘Europeans’, ‘Anglo-Saxons’, ‘Germans’, etc.), prone to deviant behaviour and pose a serious danger to the established Western social norms and even to the Western civilization itself. 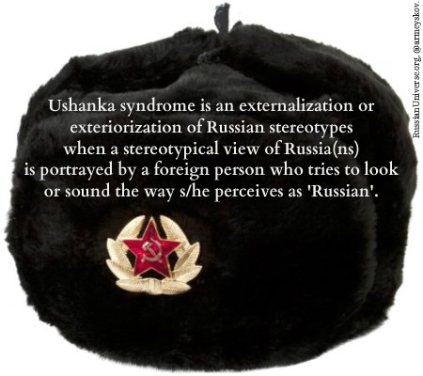