Through the Looking Glass: Western Media Coverage of Russia. Part 2.

Challenge, and not desire, lies at the heart of seduction. …

Take provocation, for instance, which is the opposite and the caricature of seduction. It says: “I know that you want to be seduced, and I will seduce you.” Nothing could be worse than betraying this secret rule. Nothing could be less seductive than a provocative smile or inciteful behaviour, since both presuppose that one cannot be seduced naturally and that one needs to be blackmailed into it, or through a declaration of intent: “Let me seduce you”. Jean Baudrillard “The Ecstasy of Communication”.

This post focuses not on ‘Pussy Riot’ itself but on a certain phenomenon which in case (no pun intended) of Pussy Riot was vividly revealed and will be discussed here as a typical example of contemporary Western view of Russia promoted via media and popular culture. On a side note: the author did not support jail sentence of the PR members (in my opinion two weeks of community service would have been more than enough for them). Unfortunately, it was the PR’s jail sentence which was the best PR for PR (pun intended) and made the brand globally recognized as well as helped to solidify the worst pre-existing Western stereotypes about Russia (see: self-fulfilling prophecy and confirmation bias).

The Pussy Riot ‘show’ was associated with the old Russian tradition of yurodstvo (‘foolishness for Christ’). After further examination this association turns out to be a postmodernist trick – balaclava mask which hides the absence of denotation (of course, if we don’t assume that copy-pasting certain ‘Western’ discourse and its word-for-word translation into Russian really denotes a social, political and feminist critique). So the Pussy Riot effect has more to do not with yurodstvo, but with a real life trolling or provocation for the sake of publicity (like nailing one’s scrotum to the ground in Red Square). Those who utilize the Pussy Riot effect can be referred to as ‘trolls for PR‘, and not yurodivy – ‘fools for Christ’. PR is for Pussy Riot:

The inevitable aesthetic judgment has found these girls, as they sometimes refer to themselves, on the right side of cool. For women identified with rock ’n’ roll — and for fans, especially in the West — Pussy Riot is expertly constructed, perfectly charged.

Pelevin was referring to Rage Against the Machine but it also applies to Pussy Riot.

The Pussy Riot effect is a phenomenon when Russians and non-Russians capitalize off of Western master discourse of Russia (Russian stereotypes, related memes, imagery, etc.) by applying it to Russian cultural heritage, social reality, historical narrative, etc., in such a manner that it looks like a ‘bad parody’, ‘mockery’ or even ‘libel’/‘slander’ for a wide Russian audience while being positioned (seen) as ‘cool’, ‘hip’ or even ‘progressive’ for (by) the Western general public. 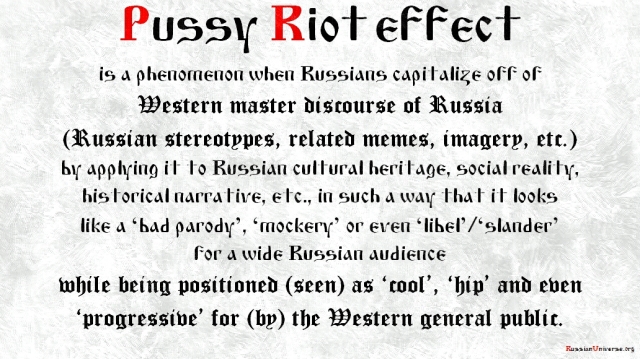 It should be noted that there could not be drawn a line between klyukvification and the Pussy Riot effect. Why? Because it is almost impossible to tell when klyukvification which is the “process of creating a peculiar stereotypical narrative using Russian cultural objects and concepts in a certain manner (exaggeration, putting them in a different context, etc.)” turns into a capitalization of this stereotypical narrative. Therefore, the Pussy Riot effect is the result of successful klyukvification.

Among the popular contemporary Russian artists implementing the Pussy Riot effect/klyukvification in their work are Vasily Slonov and Vasya Lozhkin (Alexey Kudelin).

Mark Yoffe, curator of the International Counterculture Archive at George Washington University, “emphasizes the presence of a peculiarly Russian sense of self-loathing, or inadequacy, in many of the Slonov’s images“:

They are very witty images which hearken back to the tradition of the Soviet poster, and make fun of that tradition… What is very important is the emphasis on self-degradation, self-humiliation, this is something the Russians are big on.

Insert ‘some‘ in the above quote: “…this is something some of the Russians are big on”. Yep, some are and some aren’t.

The Russians’ Russophobia is well exploited in West making it look like it’s normal or common for Russians to hate themselves. [A ‘normal Russian’ – which is an oxymoron in the Western master discourse of Russia – is a dostoyevskied one.] For example:

No nation hates Russians (and we aren’t exactly the most popular guy in class) as much as Russians themselves. When we go or live abroad and hear Russian speech, many of us will cross the street or switch to English. When we do have to meet compatriots, this is arguably the most unpleasant experience of being in a foreign country. …

It’s still a puzzle to me why anyone in their sane mind would ever want to go to Russia; or why anyone would want to live there in the first place; or why we love our bullying, alcoholic, saggy-titted motherland so devoutly, especially from a safe distance. But that is probably the thing they call the great mystery of the Russian soul. Dabro pazhalovat v Rassiyu, druzia! 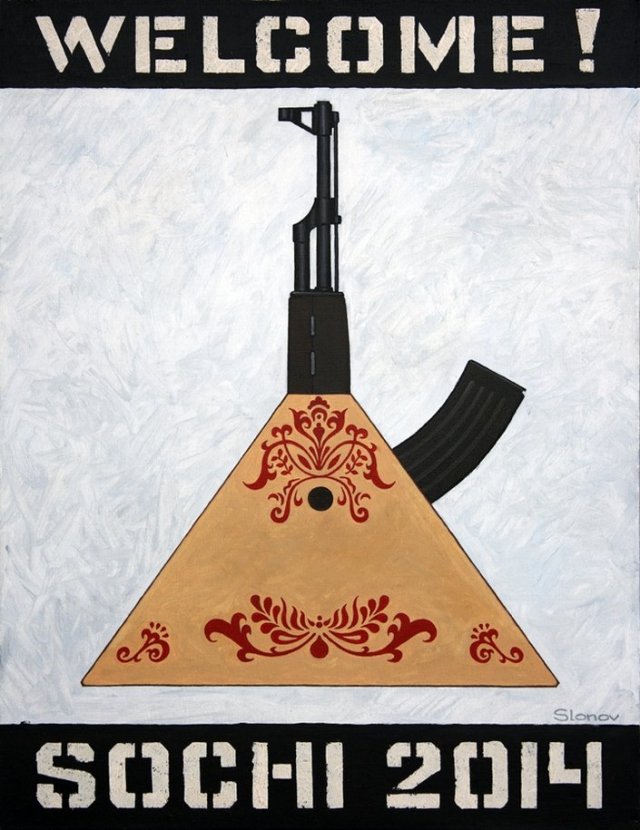 In fact, there is nothing ‘peculiar’ in this “Russian sense of self-loathing, or inadequacy“. It is the positioning of self-hate (and other psychological consequences of post-Soviet identity crisis) as specific all-Russian traits. There is (was) a problem of Russian identity crisis but it is a massive ‘po-mo promo’ of the above mentioned traits in the Western media and popular culture which makes it look like an ‘inherent Russian characteristic’: “Ivan drank vodka from samovar, fed his bear, scratched his ushanka and then rearranged the self-hate on his back so it would not hinder him from playing balalaika“.

Apparently, the Pussy Riot effect is often used as a means of building a career in Russia and/or in the West by ‘broadcasting’ the Western master discourse of Russia and making it look like it is the ‘voice of the Russian people’. The Russian surname of such ‘broadcaster’ is a huge plus here which legitimizes the dominant Western Russia-discourse: “this is what Russians themselves – not we – really think of themselves and their country”.

I refer to such talking heads (experts, activists, writers, etc.) as TV screen Russians. In the mainstream Western media they play the role of ‘good guys’ in the land of bears and ‘bad Russians’.

TV screen Russians are disproportionately represented in the Western media despite being a small minority in Russian society. Sometimes TV screen Russians are even positioned as ‘modern day Solzhenitsyns’ but again it is just a simulacrum, or in case you want some ‘peculiar Russian’ cliché – Potyomkin TVillage. Of course, this doesn’t mean that any critique of Russia can be attributed only to the Pussy Riot effect.

The motives behind intentional heavy klyukvification as a potential springboard to the Pussy Riot effect can be as follows: provocation, social or art experiment, money, fame,  identity crisis, Russophobic views (or any combination of the above).

The crude essence of the Pussy Riot effect’ approach towards Russia can be seen in the so-called ‘reality shows’ (e.g.: “Meet the Russians”, “Russian Dolls”) which remind of minstrel shows but with ‘Ruskies’ instead of ‘blacks’ and ‘Russian stereotypes‘ instead of ‘Racism’. ‘Russianness‘ of a character is revealed through ‘deviancy’. Both male and female ‘Russian’ characters are generally shown/positioned as ‘abnormal’ (‘crazy Russians‘), ‘exotic’ and ‘hypersexual’ (female characters). The Russian character types of reality shows echo the ones represented in American films which were discussed here.

‘Little Big’ utilizes heavy klyukvification which can lead to the Pussy Riot effect.

The background behind Western associations related to Russia (e.g., Pussy Riot with ‘yurodstvo’, etc.) is the tradition of Russia’s positioning in the West and the corresponding practice of Orientalization and Otherization of ‘Russia’, i.e. Russia’s image. Orientalization deals with constructing the ‘difference’ via exaggeration of some cases and positioning them as peculiar all-Russian characteristics. The discourse of ‘Oriental Russia’ is not about telling the way Russia ‘really is‘ in a critical mode but the way klyukvificators want it to appear in their narrative: hypertraditional supertyranny where bears on unicycles drink vodka from dusk till dawn.

According to the German historian Jürgen Osterhammel

‘colonialism’ can take the shape not only of this type of ‘formal’ colonial rule, but ‘quasi-colonial control’ or informal rule, and even ‘non-colonial determinant influence’ as well.

What should be pointed out in relation to the Pussy Riot effect is that it can be used not only on purpose but unconsciously. TV screen Russians and Western experts on Russia, news anchors and politicians are not necessarily ‘Russophobic’. It is the crude narrative of Russia and the worldview based on it, in which this ‘Orientalized Russia’ does ‘really’ exist. This narrative shapes the opinion of the Western general public and Russia watchers too.

Thus, Orientalization and the Pussy Riot effect are about ‘inventing Russia’. This ‘Oriental Russia’ itself is the biggest Western quasi-colonial wet dream.