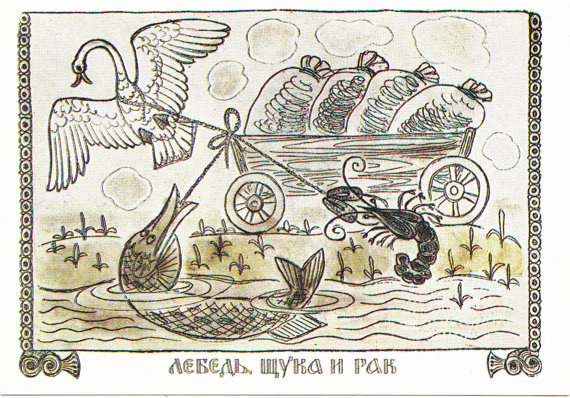 When partners can’t agree
Their dealings come to naught
And trouble is their labor’s only fruit.

Once Crawfish, Swan and Pike
Set out to pull a loaded cart,
And all together settled in the traces;
They pulled with all their might, but still the cart refused to budge!
The load it seemed was not too much for them:
Yet Crawfish scrambled backwards,
Swan strained up skywards, Pike pulled toward the sea.
Who’s guilty here and who is right is not for us to say –
But anyway the cart’s still there today.

The last line – to be more more precise – ‘the cart’s still there today‘ (воз и ныне там, voz i nyne tam) became a proverb which means: nothing has changed,  things haven’t budged an inch.

According to some versions the fable represents an allusion to discontent in Russian society with Russia’s allies actions in the War of the Sixth Coalition or disagreement between the members of the State Council.