Through the Looking Glass: Western Media Coverage of Russia.

The first post on ‘Western media coverage of Russia’ (and the third in ‘Russian Stereotypes’ series) reveals some reasons behind the #SochiProblems popularity. The second one will cover the relation between the image of Russia in the West and the collective self-image of Russians… as well as what I call the ‘Pussy Riot effect’.

Media clearly plays a very important, if not crucial role, in the process of constructing the image of a country and its people. Moreover, stereotypes and media are a match made in heaven. Russian stereotypes aren’t an exception. Certain agenda, (confirmation) bias, lack of knowledge or misconception of Russia(ns) in the Western media form a ‘perception’ iron curtain, invisible yet rigid blinkers on the eyes which produce a simplified demonization or mystification picture. I refer to the external manifestation of such phenomenon as ushanka syndrome. From Bond movies to million caricatures and memes it’s a common place that Russians – both men and women – wear ushankas. Day or night, at home or in the street Russians have their ushanka on, right?..

You know how I often can tell Western tourists in a crowd in Russia? If we forget about foreign speech, etc., for a minute – it’s ushankas!

Ushanka syndrome is an externalization/exteriorization of Russian stereotypes when a stereotypical view of Russia(ns) is portrayed by a foreign person who tries to look or sound the way s/he perceives as ‘Russian’.

Put your ushanka on (make sure it’s the one with a red star, hammer & sickle or at least with a double-headed eagle), fake a thick Russian accent, pop a shot of vodka and start talking about the “mysterious Russian soul” (whatever that is). It is so authentically Russian! 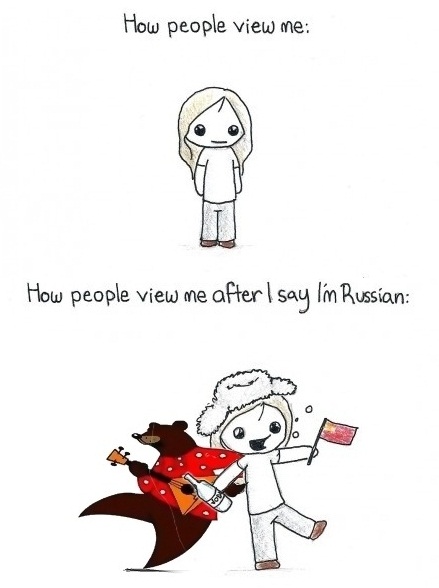 The problem is not when Buzzfeed or travel websites publish another ‘list of Russian stereotypes which are true‘ material. It is the context. The Internet is full of “meanwhile in Russia” and “in Soviet Russia” pictures and photos some of which are funny, some are weird, some are actually not related to Russia and some are Russophobic (or any combination of the above). If we use the term coined by V. Kostomarov and N. Burvikova, such memes can be viewed as the so-called logoepisteme when one word or word combination contains a whole story, it’s a convoluted narrative. When the mainstream discourse is dominated by an already known point of view, implication or inference concerning a certain object, one doesn’t have to say/write the whole ‘formula’. For example, instead of saying/posting “Russia is a land of…/Russians are… *insert your favourite Russian stereotype*” one can just come up with any particular incarnation of the above mentioned memes or simply say/write “this is Russia” or even shorter – “Russia/Russians“. The discourse is  well-known, the sender of the message and the receiver ‘get the point’. That’s why logoepistemes are welcome guests in any racist, stereotypical or Russophobic discourse.

Besides memes, another powerful tool for reinforcing Russian stereotypes is self-fulfilling prophecy as defined by sociologist Robert Merton:

Russian stereotypes circulating in the Western media also influence popular culture and vice versa. The image of Russia (which affects the worldview of the Western audience) that they form fixes ‘Russia’ as the ‘Other’ whether hostile or strange. For example, traces of such attitude can be found in… Bram Stocker’s Dracula. According to Jimmie E. Cain, Jr., an associate professor in the English department at Middle Tennessee State University

In Victorian England, a marked fear of Russia prevailed in the government and the public. As a result of the Crimean War and other Russian threats to the British empire, the English mind was haunted by a shadowy enemy of barbarous Eastern invaders. The influence of this Russophobia is evident in the works of Bram Stoker, who responded to the Russian challenge to British Imperial hegemony through the character of Dracula, a primitive and menacing Eastern figure destroyed by warriors pledged to the Crown.

Negative coverage of Russia(ns) has been more or less typical of any Western nation’s media both in the New and the Old World throughout the last two centuries.

Thus, the popularity of the #SochiProblems hashtag and corresponding Twitter accounts is very understandable. Highly shareable photos flooding Twitter with ‘proof’ of ‘bad conditions’ in Sochi (both fake and real) perfectly fitted the ready made image of ‘dysfunctional and backward Russia’. This caused an opposite reaction when some Russian and foreign bloggers and journalists who were critical of Sochi Olympics said that ‘it was too much’.

Like I’ve already said in my previous posts, Russia has always (and rather often) been portrayed by the Western media as the ‘bad guy of the world’ or the ‘Evil Empire’ long before the Soviet ‘Red alert’ of the Cold War era. The vilification discourse of Russia was due to the idealized self-image of the West backed by the ideas of Western messianism and view of West-Russia relations as teacher-student relationship (in all connotations of that).

To prove that Russia is truly the ‘land of antipodes‘ a popular stereotyping practice towards Russia was to show a Western ‘deviance’ as a Russian ‘norm’ (alcoholism, drug addiction, corruption, etc.). This is how the mystification/vilification approach in covering Russia is born. Many social issues which are present in the West and in Russia are pinpointed, highlighted and criticized as predominantly ‘Russian’. Russia’s ‘success’ in any area is tied to ‘positive Western influence’ while ‘failure’ is attributed to ‘Russian barbarity’ and ‘uncivilized nature’.

The “meanwhile in Russia” and “Sochi problems” memes had cultural predecessors in European travelogues. Russian stereotypes of an author/correspondent play the role of a Procrustean bed which (un)intentionally shapes the narrative. Whatever fits it makes the cut, whatever contradicts it is cut off. It works the following way: for example, walking in the suburbs of a Russian city one finds a group of gopniks. If this group is positioned in the report not as gopniks but as ‘typical Russians‘, then it’s stereotyping.

Undoubtedly, Russian stereotypes to this day are alive and well in the Western media because they represent the way many people there – including journalists – view us. When the stereotypes are used in caricature (e.g. the Russian bear archetype, etc.) in many cases there’s nothing wrong with it. But when there is a lack of profound analysis of Russia and the mainstream discourse is a textual version of these caricatures – it’s a complete conceptual failure which can lead to further misunderstanding on behalf of the both sides.

P.S. I guess the Imperial March played on balalaika is a good ending for this post 😉