В ногах правды нет (v nogakh pravdy net). Literally: there is no truth in legs. Said when inviting someone to seat down.

There are several explanations of this Russian saying. According to one of them, in Rus’ (i.e. Russia) in 15 – 18 cc. debtors who didn’t pay their debts were punished by beating their feet and calves with sticks and/or standing on the snow without footwear. It was called “postavit’ na pravyozh” (literally: to [make someone] stand for correction). I translated the word “pravyozh” as “correction” but in the old Russian law pravyozh had a meaning “execution of judgment”, e.g. forcing to pay debts, etc. In Russian this word has the same root as “pravda” (“truth”) and “pravo”, i.e. “right“, here – the right of a debtee to get money from the debtor. Thus, “pravda” at that time meant rights of a person which could be protected in court (cf.: Russkaya Pravda). So if a debtor had no money and/or no warrantor who could pay the debt, the debtee couldn’t protect his pravda and get his money back by beating the debtor’s legs. 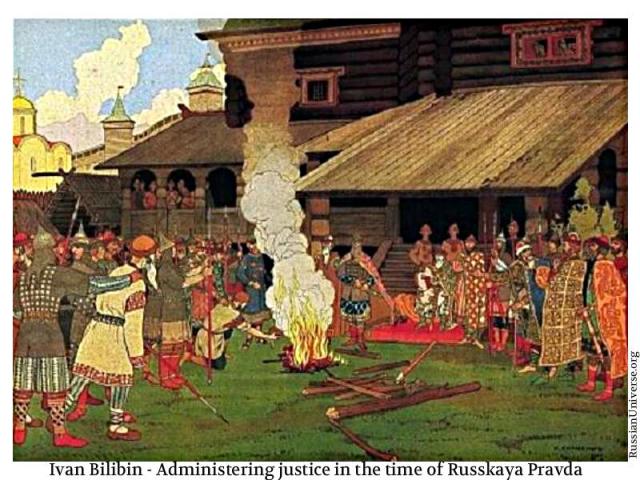 Another version states that a pomeshchik (landlord) punished his serfs when something was stolen (or something else happened) and he didn’t know whose fault it was, he made them stand until they told him who did it. Because such type of torture inquiry was extremely imperfect and often innocent people took the blame, a common saying emerged that there is no truth in legs.

According to the last version, the genesis of this idiom is related to the following: if a debtor ran away from pravyozh/punishment, the debtee couldn’t protect his pravda/right to get his money. Probably all of these versions could have contributed to the emergence of this saying: there is no truth in legs.

One thought on “#RussianSaying: There Is No Truth in Legs.”